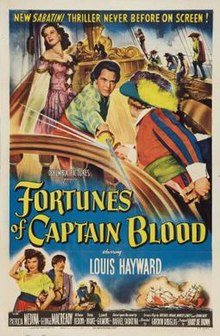 Fortunes of Captain Blood (1950). When he unwittingly sends some of his men into a trap, pirate Captain Peter Blood decides to rescue them. They’ve been taken prisoner by the Spanish Marquis de Riconete who is now using them as slave labor harvesting pearls from the sea. With help of the Marquis’ daughter Isabelita he not only manages to rescue his men but also vanquishes the Marquis in a sea battle.

Previous Article
The Vikings (1958)
Next Article
Pirates of the Caribbean: At World’s End (2007)