Seven Seas to Calais (1962). Englishman Sir Francis Drake (Rod Taylor) is a plague upon Spain. Routinely attacking their ships and stealing their gold, Drake makes it his duty to cause as much devastation to the world power as possible. Although Queen Elizabeth I (Irene Worth) is quick to publicly condemn Drake’s actions, she covertly gives him all the support he needs. When King Philip of Spain plots to assassinate the queen, Drake is able to thwart him — so Philip decides to send his unrivaled armada after the pirate. 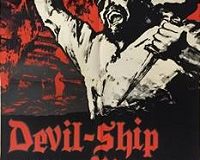