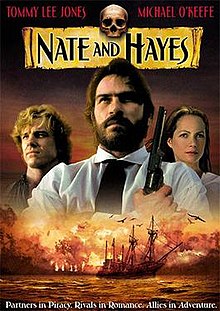 Nate and Hayes (Savage Islands) (1983). Nate and Hayes is a 1983 swashbuckling adventure film set in the South Pacific in the late 19th century. Directed by Ferdinand Fairfax and filmed on location in Fiji and New Zealand, it starred Tommy Lee Jones, Michael O’Keefe and Jenny Seagrove. It was one of several 1980s films designed to capitalize on the popularity of Indiana Jones, but Nate and Hayes was a flop at the box office. This contributed to the stigma that pirate swashbucklers were box office poison, a belief not laid to rest until the 2003 release of Pirates of the Caribbean: The Curse of the Black Pearl.